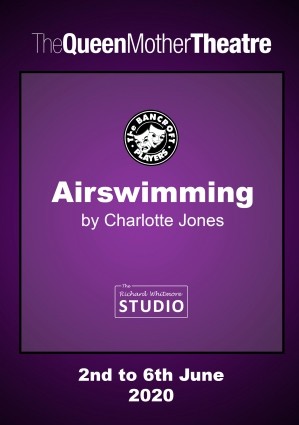 Airswimming is based on the true story of two women incarcerated in the 1920s in a hospital for the criminally insane having borne illegitimate children. Forgotten by their families and not released until the 70s, Dora and Persephone adopt alter-egos to enact their fantasies and survive the silence of incarceration.

By turns very funny and moving, the play reminds us of the forgotten women of these generations in Britain and Ireland. Neither is sure why they are there but as he decades roll by and they become institutionalised you begin to realise that, if they weren't mad when they went in, they certainly are when they get out. Airswimming plays with linear narrative as their story is told both forwards and backwards.

It's difficult to get a grasp on time as, like the characters themselves, you struggle to decipher what the year is and how long these poor women have been incarcerated. Initially polar opposites, they grow fiercely dependant on each other and develop an unhealthy relationship as they disappear into their imaginations to escape the horrifying facts of their reality.

Spanning over 50 years the depiction of their descent into madness is as funny as it is chilling.

All information (dates, times, ticket prices etc.) presented on this site is believed to be correct at the time of publishing.