Trial by Jury & The Sorcerer 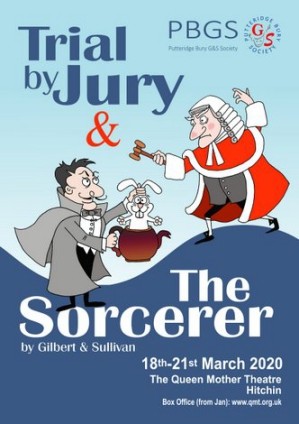 Trial by Jury depicts a hilarious court case of a jilted bride and the undoubted cad brought before a learned but unpredictable judge. When the court is invaded by

bridesmaids, the foreman of the jury reveals his love for the bride and the defendant proposes bigamy, only the judge can make the final decision. On the same theme of love, an engaged couple in The Sorcerer have instructed J.W. Wells to cast a magic spell on the entire village so that they are all in love. But disaster strikes when the village wakes up and falls in love with the first person they see, mixing old and young or posh and poor, including the Lord and Lady of the Village.

Only the sorcerer can break the spell..

All information (dates, times, ticket prices etc.) presented on this site is believed to be correct at the time of publishing.